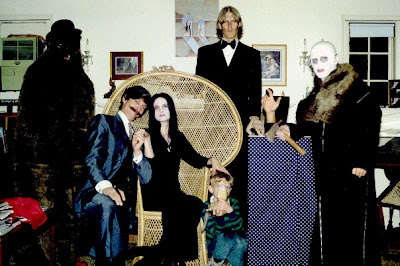 One of my favorite websites is Paul Overton’s DudeCraft, a crafting site for guys. I was flattered when he said he was asking a bunch of well-known bloggers to share their Halloween stories and he asked me. Here’s my piece.

[That’s me as Cousin It on the left]

Last year, I had the pleasure of contributing to an art book put together by Greg and Amy Brotherton, for their Device Gallery in La Jolla, CA. The book was called Fantastic Contraption, and featured some of my favorite artists working in what I call mechanical animism (and what Greg calls post-industrial surrealism). The book was beautiful, filled with art by the likes of Stephane Halleux, Mike Libby, Nemo Gould, and Greg Brotherton himself.

This year, they asked me to do the intro to the second volume in the series, called Reconstructed. All the above artists are back, joined by Christopher Conte, Jeremy Mayer, Lewis Tardy and many others. It’s hard for me to imagine, but Volume II could be more gorgeous than Vol 1, but it is. Everyone who sees it on my coffee table freaks out. It’s really a beautiful piece of book art and a fantastic collection of significant artists working in a fascinating, deliciously uncategorizable genre.

The Maker Shed sells Volume I of Device. You can buy Volume II directly from Device Gallery.

Hey, elephants and chimps (and children) can do a pretty good job of abstract painting, so why not bugs? Artist Steven R. Kutcher dips the creepy crawlers in (watercolor) paint, or has them traipse through it, and then he lets them scurry across the canvas (watercolor paper).

Kutcher influences the… ah… artists by manipulating light sources, as most insects move toward or from a light source. Kutcher paints the backgrounds beforehand and obviously chooses the color palette, so it’s really collaborative man/bug art. He carefully cleans the little critters off afterwards and says that there’s no apparent harm done. When not painting with arthropods, Kutcher is a bug consultant to the film industry.

Do you think if I put these fan blades up in my bedroom it would freak out anybody who ends up ensnared in my lair o’ dark sensuality? Yeah, probably. I am SO ordering a set! Actually they’d look great up in the clearstory ceiling of the ol’ Street Tech Lab offices. They’re only US$40 a set. [Via Boing Boing Gadgets]

Before we port it off to the right nav panel, we wanted to remind anybody who hasn’t yet to please fill out our Street Tech Marketing Survey. Read our earlier groveling plea here. We promise we’ll love and cherish you forever, keep you in our prayers, sacrifice goats on a Heathen altar, whatever you require.

I’m a writer. I love my job. How could I not? I find things that interest me and then I convince magazine editors and book publishers to pay me to explore them.

But it’s not all a bohemian rhapsody. The pay can suck (and frequently does), and self-disciplining your time can prove an epic struggle.

And then there’s the silence. Writing is a solitary business (difficult for a social critter like myself). You can push pixels for months without hearing much of anything from your readers. And, people tend to only talk to you when they think you suck, and they’ll tell you just how much in the most excruciating detail (and purplest of prose). Positive feedback, beside the sparse “thanks,” “good job,” or “interesting article,” is hard to come by.

What redeems this sometimes vacuous process is the weight of the positives, when they come your way. I had a guy come up to me, after a talk years ago, who said that the Happy Mutant Handbook had literally saved his life. He’d decided to go through with the grim deed the coming weekend. But in the meantime, he’d happened upon the HMH in a bookstore, bought it and had spent the weekend reading, postponing his date with the big sleep by the hour. He ended up being so tickled, so inspired by the book, he’d decided not to off himself by the time he’d finished. And so, there he was, at the podium, thanking me for saving his life. This utterly stunned me, the idea that my work had, in even the smallest way, helped save the life of another human being. It made the months and years of little-to-no positive feedback well worth the wait. And then there was the guy who read my article in Wired on neural implant technologies (“The Desire to be Wired,” Wired, No. 4) and decided to go into neuro-surgery and electronic engineering. He’d emailed me a thanks some four years into his studies.

I may sound like I’m tooting my own horn here, but you have to understand, these are two stand-out positive examples in some 25 years of being a professional writer. There have been a few more, but not many. I got another one yesterday…

Michael Aherne emailed me back in October of last year. He was three years out of college, with a degree in engineering. He’d read my Absolute Beginner’s Guide to Building Robots and had been inspired. He’d been thinking about going back to school, about applying to Stanford for a Master’s degree in biomemetic robotics. He said that ABG to Building Robots had “brought out some of the best ingenuity and creative thinking” in him. He said he was going to apply to Stanford and hoped that three years of industry experience and his aptitude for robot building (as exemplified by the robot he built from my book) might be enough to get him into the school.

Well, I got email from him yesterday. He didn’t get into Stanford, but he did get into USC. He even sent me a photo of his admittance letter. He’s going to be studying space robotics. A hearty congrats, Micheal. From me and everybody here at Street Tech! Definitely let us know how it’s going and what sorts of bots you’re working on — writers like myself, sitting in the quiet of my cluttered backroom home office, live for such news. Seriously.

And here’s the one-motor walker he built from my book (his name is Charlie):

Please help Street Tech. If you could take a few minutes to complete our site survey, it would be a huge help to us in better marketing Street Tech. Our site is ad-supported. We can’t do what we do without this support. By knowing more about who reads Street Tech, we can improve our “fit” with advertisers, sell more, better targeted ads, increase our ad revenue, which will lead to more and better content, our long-overdue site redesign, etc. Everybody’s happy.

Even if you filled out the survey before, please do so again. The more respondents we get, the better picture we’ll have of our readership.

BTW: You can also help us out by not blocking ads that we serve. We try to keep our ad service reasonable and tasteful (no pop-ups, no floaters, etc.). It would be a HUGE help to us if you made exceptions in your browser software to allow ad service and javascripts on Street Tech.

Hackszine has posted a cool discovery, sent in from a reader, about a feature in my fave open source video player, VLC:

I discovered yesterday that the wonderful VLC media player has the ability not only to mount a DVD directory that’s been ripped to the hard drive, but also to play a .iso image of a DVD. Seeing as I’ve been using it for ages without knowing this was possible, I figured a lot of other people would be ignorant to this feature!

I was! Read more here.

I’m going to be a regular contributor to the Make blog. I’m psyched! I think it’s, hands-down, one of the best ports o’ call in cyberspace. Phillip Torrone consistently does a bang-up job. So I’m honored to be asked to contribute.

My first item is up. It’s a How-To on telling temperature using crickets. It’s a follow-up to a piece that Robert Krulwich did on ABC World News last night (6/2/07). It’s currently a very cool and comfortable 37 cricket chirps here at Street Tech Labs.