If you thought those Billy Bigmouth animatronic bass were creppy and stupid before, just wait ’til you hear your mother-in-law talking to you through one! This guy is creating an embedded Linux videoconferencing system using a Billy Bass. So far, he’s only made the gag gift say whatever he wants it do say, and he hasn’t updated the site in a long time, but given the holiday season, and the fact you might end up with one of these suckers, we thought we’d offer some hacking inspiration. Any amount of hardware hassle is worth it if you can make it stop singing that damn "Don’t Worry Be Happy" song! 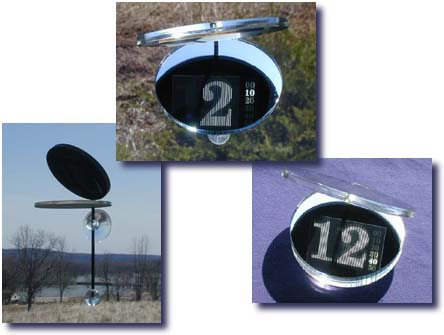 In a singular blend of artistry and utility, the digital sundial combines the ancient science of sundials and advances of modern technology with elegant simplicity. Like a digital clock, the digital sundial displays the current time using digits. In the true tradition of all sundials, the device is purely passive – it operates without electricity, and has no moving parts. Instead, the sunlight is cast through two cleverly designed masks in the shape of numbers that show the current time of day. The sundial is available in two versions, for use in either hemisphere. Placed on the inside of a south-facing window (north-facing in the southern hemisphere), the sundial can be read through the horizontal mirror. The display updates every 10 minutes, and gives a remarkably accurate record of the time during the daylight hours.

Looks like Mark Tilden was spotted at the Vegas Comdex 2003.

It should come as no surprise that we at Street Tech like to check out the competition, with our specially-tuned BS detectors set to “high.” C|Net is one of my favorites, and while trolling through their reviews, I ran across an interesting tidbit;

“This reviewer will march naked down Broadway in the middle of February if anyone can show us a recognizable photograph taken with the Dimage Xt 100 feet underwater.“

That challenge, issued by C|Net reporter Eamon Hickey in June, is apparently still unmet. Well, with x-mas coming up many people are going to be finding the Minolta Dimage Xt under their trees, and then perhaps taking a tropical vacation, I think it’s a perfect time to extend this challenge to the whole internet community. So go out, dive deep, and let’s see what we can come up with! Street Tech will offer a meager prize of some swag, signed by ST’s Editor in Chief and Senior Editor, as well as some odd technology we have lying around the labs, to the first person who can put Eamon Hickey marching down Broadway!

Today is the day that “number portability” goes into effect, theoretically letting you change cell phone service providers without having to lose your number. This only applies to people living in the top 100 largest metro areas in the US though, while others will have to wait until May (for apparently no good reason). And of course, number portability doesn’t get you out of a contract if you have one, so you have to stay with your provider for at least a little while longer. And then there’s the trouble of signing up with a new carrier…you’ll probably have to sign a contract again. So portable mobile phone numbers (oh how I hate that sentence) are really only a little more portable than before.

This new rule has already had an effect on the plans that some carriers are offering: Sprint has started its free evening calling starting at 7:00 pm instead of 9:00 pm, and T-Mobile added Friday to their free calling plan, creating a three day weekend. Cingular has bumped their Roll-Over Minutes plan up a bit, but primarily been touting their new “FastForward” phone cradle (pictured left) that transfers calls automatically to a landline when the cell phone is placed there. Forwarded calls do not count against a subscribers plan.

While it remains to be seen exactly what effect number portability will have, all of this gives us a taste of what’s to come: better plans, lower prices, new features, and perhaps an end to contracts. One analyst expects “massive price wars, and churn [will go] through the roof.” Let’s hope so!

If you thought having an Aibo was the highest tech pet you could get, you’d be wrong. Check out the genmod guppie (okay, actually it’s a zebra fish) which has been enhanced with the genes of phosphorescent corral so that it is bright red in daylight and glows at night. Available, barring government intervention, sometime in January, these fishy little fishies will retail for about $5. Don’t think you can just get a couple and grow a whole tankfull — while the genes for glowing in the dark are carried on to offspring, like most genmods these guys are patented.

While I think the idea of genetically modified fish is pretty darn cool, I’m surprised that there is no governmental agency responsible for their oversight. Apparently if it’s not being eaten or used to produce medications there’s nothing that stands in the way of making any kind of wierdo pet you want and selling it on the open market, regardless of environmental impact.

That said, I’ll be the first to sign up when they offer this mod for humans — how cool would it be to glow in the dark!

Update: To answer the questions of those wondering about the EULA that comes with these, a company spokesperson has responded:

“– The fish are not sterile. When they reproduce their color is passed along to their offspring.

There is no provision over users breeding the fish, however, it is illegal for any entity other than Yorktown Technologies L.P. to sell them. – This is covered by a variety of patents and permissions secured by Yorktown.”

And here I was being all cynical about corporate America — silly me!

Okay, bad title. But I’m out of creative juice for today.

Anyway, I’ve just heard about a great resource for those who are trying to get more mobile. JiWire is a free service for finding wireless internet hotspots — mostly at coffee joints — and it is pretty darn comprehensive. Just type in your location to the web-based system and it’ll spit out the addresses of WiFi hotspots in your area. The spots are searchable by provider (i.e. T-Mobile, Boingo, etc) and give a breakdown of the daily access cost. They also have articles describing various aspects of wirelessness, including how-tos and gadget news.

While the site is a great resource, it’s still working out some kinks and could use a few more wireless-friendly features. First, the easiest way to find a WiFi hotspot is if you’re standing in one, since JiWire is web-based. An obvious catch-22, JiWire addresses this by allowing access from WAP browsers on cell phones, so you don’t need to be online to get online. It would be even more helpful though if the service could respond to SMS or email inquiries, since these are easier to use and more pervasive than WAP. Secondly while the service does allow filtering of hotspots by some criteria, it doesn’t allow filtering by “open” hotspots in its main search engine, and the free spot locator seems to be broken. This means that you have to go through a few hoops to find the nearest free access point. Finally, the service is best only in major metro areas. There are 11,000+ hotspots cataloged in the US, which is an impressive number, but looking for spots in Biloxi turned up nothing. Well, yet another reason not to go to Biloxi, I guess…

The NISIS Pocket DV4 is another entry into the burgoening class of flash-memory camcorders. While not as slick as the Panasonic or the Sanyo, the NISIS measures 4.2″ x 2.7″ x 1.6″, so it’s just about as small. It’s not as good at taking pictures though, since it’s just a 2 megapixel camera (or up to 4 mp “with firmware interpolation”). The motion video is better res than most, but captures at just 10 frames per second at full 640×480 resolution, or up to 20 fps at a lower res. Upsides include the ability to use it as an MP3 player and webcam, but the major downside appears to be the limit on the size of the SD card it accepts — just 256 megs, which means an absolute limit of about 20 minutes of high-quality video. And it only has 16 megs internal RAM. The price is reported to be around $200, and they snapped ’em up at Comdex last week according to TechTV.

While Apple has been releasing smaller and less expensive laptops to expand their market, apparently they’ve decided to go large with a 20″ widescreen iMac. With a 1680 by 1050 res screen, it’s easily the most impressive display on any all-in-one PC and easily worth the premium price of $2200. And this thing hasn’t just got a pretty face, it’s got brains to boot — a 1.25GHz G4 chip, 333 MHz memory (only 256 megs tho), 80 gig HD and DVD-R drive. If anybody was wondering what to get me for x-mas, this is it.

Similar to the Panasonic e.Wear SD AV, the new Sanyo FVD-C1 is both a video camera and still camera, but at much higher resolutions than the e.wear. It records full-motion video at “DVD quality” 640×480 res at 30 frames per second. Still images are captured at 3 megapixels, and all video and images are recorded on SD cards. The included 512 MB card holds just 1/2 an hour of video though, so don’t scrap the old DV camcorder just yet if you plan on recording the local pee-wee soccer games. Price is listed at $900. More info and pics from Mobilemag.