We’ve started our massive menu of holiday gift guides on MAKE. We’ll be running them from now until Christmas, and covering everything from dangerous gifts (things that go woosh, boom, splat) to crafting gear for guys. Guest guiders will include Bill Gurstelle, from Backyard Ballistics, and Diana Eng, from Project Runway/Fashion Geek.

Here’s my introduction to the series and my first guide (on geek toys for grown-up girls and boys).

I hope you have our Make: Online Halloween contests on your radar. We’ve teamed up with Microchip, Inc. this year and are giving away Microchip products (microcontrollers, sensors, I/O boards, etc.) leading up to our big Halloween contest where we’ll be giving away nearly $1,000 worth of microcontrollers and accessories. To enter the weekly drawings, you just have to comment on the appropriate item on MAKE. To enter the big contest, you need to do a Halloween project that involves any brand of MCU, document it, and send us the deets. 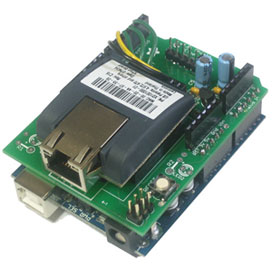 Bringing ethernet connectivity to the Arduino for around fifty dollars, Lady Ada’s XPort Shield has gotten people understandably excited. But with a little elbow grease and a custom firmware, you can do even better: a $10 component can bring Ethernet, wifi and a full Linux environment to your microcontroller project. Not bad, right? Tom Lee will explain how, and show a simple Arduino-based ambient display that uses the approach to show Metro schedule information.

Tom Lee is a DC web developer and technologist who contributes to DCist, Techdirt and whatever other blogs will have him. Gareth will present a “Maker Profile” on under- appreciated American rocketry pioneer Jack Parsons, based on “Darkside Rocketeer,” his piece on Parsons running in MAKE Volume 13.

Jack Parsons is one of the most important figures in the history of American rocketry and space development. He invented the JATO (jet-assisted take-off) motor– America’s first rocket program, co-founded the Jet Propulsion Laborartory and Aerotech Corporation, and created the formulations for solid rocket motors still in use today. Unfortunately, Parsons’ controversial private life — as a practitioner of ceremonial magick, a follower of infamous British occultist Aleister Crowley, and as a devout hedonist — has caused many of his technical achievements to be shoved into the closet of history. Parsons’ untimely death in a mysterious home lab explosion, has only added to the sordid nature of his story.

Gareth will talk not only of Parsons, but the group of fellow amateurs and CalTech students he worked with, known as The Suicide Squad, and the amazing intellectual backdrop of Pasadena and CalTech in the 1920s and ’30s.

Gareth Branwyn is a writer on technology and fringe culture. He is a contributing editor to MAKE, writes for the Make: Blog, and is an editor for O’Reilly’s Make: Books imprint.

I have to admit that sometimes I’m a style over function guy. I’ve been known to suffer for fashion. What can I say? I’m an extremely visually-oriented person, so things that look unspeakably cool juice my brain with all sorts of pleasure chems. So it’s no wonder that I just HAD to have the black MacBook, even though you basically pay at least a hundred bucks extra for a black paint job. I’d also heard beforehand that it was a royal pain to keep clean. But that satiny, matte black finish — it was just too damn tasty to resist. So I got one, and I love it. I love it so much, I polish it every day (okay, often *several* times a day) like a classic car. Good thing too, ’cause the BlackBook attracts grease like you can’t imagine. By the end of a busy day, it looks like a cross between a bus station vending machine and a crime scene dusted for prints, slick with grease and dotted with finger- and handprints.

I was lucky enough to already have the ultra-soft cleaning cloth that came with my equally high-minded Logitech DiNovo keyboard. But I kept misplacing it, or having to traipse all over the house to find it. I started also using an old Minolta lens cloth I had, but it’s kind of small.

This past week, while staying at the Radisson Hotel for Maker Faire Austin, I found the perfect BlackBook cleaning solution: the hotel shoe mitt! There were two of them clipped to the laundry bag in my closet. They’re the perfect scratch-proof fabric and you can put your hand inside to apply more rubbing pressure, clean around the edges, etc. It’s quicker than a small flat cloth and you can do a much more thorough job. And the mitts are free! If you travel a lot, you can collect a bunch of them in no time. Now my foolishly impractical grease-loving BlackBook looks as untouched by human hands as its pretentious designers intended. And I’m a much happier fashion victim as a result.

If an IED (Improvised ELECTRONICS Device) gets you nearly gunned down at the airport, will a PICTURE of one also get you cavity searched? My guess is yes. But I want one anyway. Modeled here by one of the MAKE cohort and founder of Squid Labs, Saul Griffith. The shirt was designed by Ed Lewis. No word on if they’re for sale or not.

BTW: Tim O’Reilly has a wonderful profile piece on Saul on O’Reilly Radar.

Steampunk Magazine #3 is out. Yay. You can buy or download you copy here.

UK steampunk/macabre artist AlexCF continues to outdo himself. Each of his dusty, time-worn kits and cabinets of wonder get more ambitious and layered with staggering amounts of detail. His latest piece is called the Bio-Etheric Laboratory: Experiments in Reanimation. Amongst the familiar antique bottles, unnaturalist notebooks and field drawings, candles, antique labware, and other curious artifacts sits a severed ape forearm. An animatronic severed ape forearm. Appropriately, it’s powered by a knife switch mounted on the case, so you can have hours of fun playing the modern Prometheus. And just in time for Halloween!

More than a year after claiming to have found a way to take over a Macintosh computer using a flaw in the system’s wireless card, David Maynor has published details of his exploit.

The details were included in a paper published in the September issue of Uninformed.org, an online hacking magazine. The lengthy paper describes how to run unauthorized software on a Macintosh by taking advantage of a flaw in Apple‘s AirPort wireless drivers.

Read the rest of the piece…

Steampunk bellydancers? Now that’s the kind of micro-specific taste tribe that only the interweb could put together. But steampunky women, moving the world on hip-hugging corset belts bangled with all manner of clockwork curios and other techne bits? What’s not to love? I especially love how the belt apparently says “Not Yours.” Gotcha.

By the way, the goth-white midriff seen here belongs to steampunk artist Libby Bulloff. Her show “Pipe Dream” can be seen through the month of September at the Buskirk Chumley Textillery Gallery, Bloomington, IN.

The next Dorkbot DC is this coming Monday, Sept. 10. This’ll be our first meeting away from our old home, Provisions Library. This one will be at the Marian Koshland Science Museum of the National Academy of Sciences (6th and E Streets, NW). Above is a PDF flyer you can print out and distribute. See the Dorkbot DC site for more details. I hope to see lots of local Street Techies there!